After the devolution of the Carolingian state, the only institution linking the fragmented Germanic lands was the church. Patronage of the church was therefore an essential Ottonian strategy for reimposing political hegemony. Providing the papacy with military protection in exchange for the imperial crown in 962 was another strategy. As emperor, Otto established what amounted to a state church. Exploiting the weakness of the papacy, he assumed the power to appoint and invest abbots, bishops and archbishops throughout the empire. Simultaneously, he launched an expansionist policy which included the evangelization of pagan territories.Otto&rsquo;s personal patronage of the church was therefore an adjunct of imperial policy. He had founded the mission abbey of Saint Moritz in the frontier city of Magdeburg in 937, to strengthen his presence in the east. Subsequently, a metropolitan see was established there in 968, with the abbey church rededicated as its cathedral. Otto commemorated that event with a gift to his foundation, which is depicted in an ivory plaque carved in the 960s. Here, we see Otto, wearing the imperial crown, offering the church at Magdeburg to Christ. Although Otto&rsquo;s patron saint Moritz acts as his intercessor, Christ receives the donation directly to from Otto, placing his hand on the model church. This simple pictorial device stresses the emperor&rsquo;s role as Christ&rsquo;s primary earthly agent, a relationship this is not mediated by the ecclesiastical hierarchy.This ivory is from a set of an estimated 50 ivory plaques depicting scenes from the life of Christ that decorated a liturgical furnishing donated to Magdeburg Cathedral by Otto around 968. The typology of that furnishing is unknown, as it was destroyed in a fire in 1049. The sixteen plaques that survived were reused in reliquaries and book bindings, such as the Codex Wittikindeus, seen below. 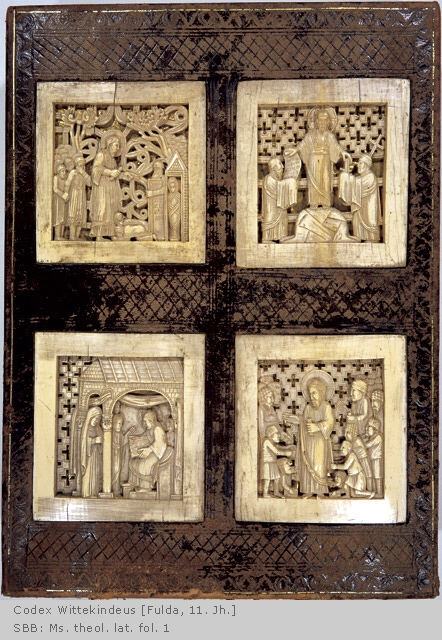 It has long been thought that the ivories were part of an antependium, or altar frontal, the early medieval forerunner of the altarpiece. We know that Otto stopped in Milan on his travels to Rome and that he procured building materials for Magdeburg there. As he was likely to have visited the shrine of Saint Ambrose (in the basilica of Sant’ Ambrogio) while in Milan, he probably saw the Carolingian antependium attached to the high altar. That work, produced by a goldsmith called Wolvinius around 830, comprises three tiers of high-relief, repoussé panels of gilded silver, depicting the Life of Christ and St Ambrose,that wrapped around the four sides of the altar.

The Magdeburg ivories were probably arranged in a similar tiered structure, with perhaps 4 rows, given the size of the plaques. The reticulated backgrounds of the ivories suggest that they were originally backed with gold leaf or gilded silver, creating a glimmering visual effect that may have been inspired by the metalwork altar frontal as well. Otto’s antependium differed from the Carolingian model in key ways. The choice of ivory as the material is ideological as well as aesthetic. Elephant ivory was a much more expensive luxury commodity than silver, and only those at the top of the social ladder could afford to use it extravagantly. Ostentation, however, was not the only motivation for choosing ivory. In the 10th century, the finest carved ivories known to the Ottonian world were produced for the eastern emperor, by workshops located in the imperial palace at Constantinople. Through the imitation of Byzantine patronage of the sumptuous arts of ivory carving, Otto seeks to enhance the prestige of his nascent empire.

Scholars have determined that two different artists carved the Magdeburg ivories. Based on the decidedly northern (i.e. flat, linear, summary, abstract) carving style, the artists are presumed to have been German (not Italian, as is often stated) and their stylistic sources Carolingian. The uniformity of style across all the plaques suggests that both artists copied the style of a single model. If they did share a common model, they worked together in the same space where the model was located. There is every &nbsp;reason to assume that Otto installed them in the imperial residence at Magdeburg. With the establishment of an in-house ivory workshop, Otto again modeled his patronage of the sumptuous arts on that of the Byzantine emperor.

This all changed in the 980s, when Otto’s son married a Byzantine princess, which opened up a direct channel from Magdeburg to Constantinople through which ivories could be imported.